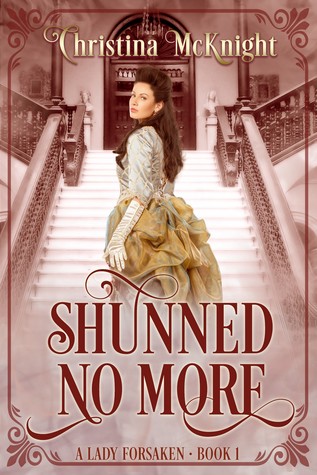 Lady Viola Oberbrook is hiding from the past. A past where two brothers lives were taken because of her selfishness.  She now lives in the country running a business with a few trusted friends.  She has no plans to return to London until the past confronts her head on.

Brock Spencer, Earl of Haversham, just returned to England from war with plans to renovate his estate, find a wife and seek vengeance on the one woman who destroyed his family.  But his plans change when he falls for the woman who should never be apart of his life.

This book was stunning.  I loved the romance, the backstories, and the characters.  The two main characters Viola and Brock were a wonderful match for each other for they each had vibrant yet haunted characters.  Viola was brave yet constantly feeling guilty.  She strove to change and to never be the same girl as she was in her youth.  She ran a horse stable despite the fact that in the times most ladies did not run any sort of business.  Brock was haunted by his past and his family unwilling to let it rest.  He was ungracious at times but it was easy to understand why.  In the end, they both forgave each other and let the future take over instead of dallying on the past.

The romance between the two characters, however, was a little rough and underdeveloped.  The book spent most of the time focusing on the characters trying to get past their emotional pains but the relationship between the two main characters stuttered.  I think that the romance could have been less instantaneous for it seemed to just happen in the last two chapters of the book.

There were hints throughout the book that Brock and Viola had feelings for each other and there was even a kiss but it was not generally acknowledged by the characters.  It wasn’t a bad romance and they were a good pair but their romance just seemed too quick.

The backstories were phenomenal.  The main characters and even the side characters each had their own pains and character development.  I loved the changes that the events in the book brought about in the characters, especially for Viola.  During the Prologue, I hated Viola because she was arrogant, selfish, stupid, and uncaring.  I almost stopped reading there because I couldn’t stand her character.  However, I was glad that I stuck that one chapter out for the Viola we met in the next chapters was much changed.  She continued to learn and grow from each mistake she made and Brock did the same which made the book all the better because the reader could easily witness the character development enacted.

Overall I adored this book and would recommend it as an excellent example of its genre.