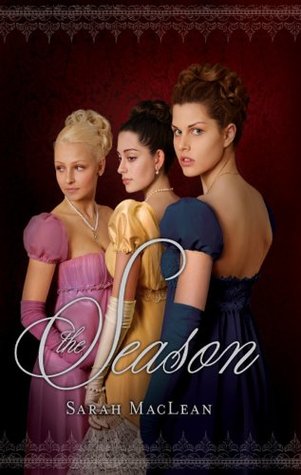 Lady Alexandra hates balls, gowns, and the idea of romance which doesn’t help her fit into the world of Regency London.  She is more interested in adventure than finding a suitable husband.

Between gown fittings, balls, dinner parties, and country weekends Alex and her two best friends, Ella and Vivi, manage to become entangled in a dangerous scrape.  When the Earl of Blackmoor is killed in an accident that suggests willful and evil intentions, Alex decides to help his son, the brooding and devilishly handsome Gavin, uncover the truth regarding his father.  She is wrapped up in murder, espionage, and suspicion but as she grows closer to Gavin her heart is dangerously threatened.  Romance and danger circle the high society of London as the year’s season begins.

The Season was a wonderfully light and easy read full of mystery and the pressures that women of the time faced.  The book portrayed the expectations of society that young women find a suitable match and quickly in their coming of age debut during the season.  The romance was slightly predictable but aren’t most romances?

The author kept it lively with the constant arguments and political conversations enjoyed throughout the book by the main character and the people around her.   The main character, Alex was the epitome of a rebellious strong-willed woman who is not afraid to state her opinion and conform to society’s norms and rules.

However, the first half of the book focused entirely on building Alex’s and Gavin’s relationship and we learned and heard little about the mystery regarding the death of the Earl of Blackmoor.  All we heard was that he was killed and it might not have been an accident.  In fact, we are shown what the season is like and the many love interests of Alex.  We get to know her character and the characters around her but the action does not happen until the middle of the book where the mystery is finally fully revealed and the relationship between Alex and Gavin hits its climax.

It was not boring exactly but the author could have reached the mystery quicker without building so much backstory.  If the author had not included humor, wit, intriguing characters, and the constant need to know if Alex and Gavin were a thing, the book would have been hard to get through.  Despite that I enjoyed it and would recommend it to people in need of a quick historical romance.