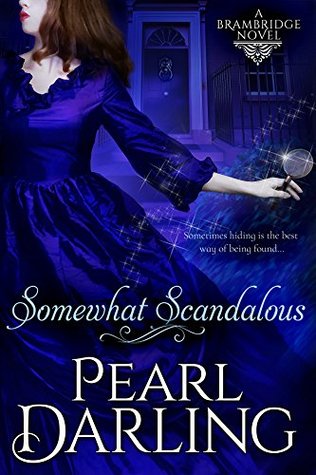 Miss Agatha is finally free of her grandfather which means she finally gets to let her scientific inhibitions free.  But when she is saved by Henry Anglethorpe who wants her as a companion for his sister he doesn’t want any scandal attached to his name.  He is a spy and a new menace threatens England.  The war office asks him to find a bride to make it easier to gather information and he finds he only has one lady in mind.  But as he chases his bride to be from one event to another he finds that she has other things on her mind and that she may not be who she claimed to be.  As secrets continue to reach the French Henry must find the one responsible while trying to obtain the woman he loves.

This book is definitely not a favorite of mine.  I enjoyed parts of it but sometimes I just wanted to throw the book across the room.  I have several reasons for this.  First and foremost I hated how the book had three instances where the book jumped ahead by at least a year or more.  The first time it happened was after the prologue which is understandable because it was a scene from the past that was important to the rest of the book.  The next two times felt unnecessary and overly long.  The two main characters were trying to distance themselves from one another despite the feelings they felt for each other.  So, what do they do?  They go off and live separate boring lives to the point where we have to skip three years into the future before anything interesting happens.  The chapters surrounding the jumps in time were boring and I would have preferred that they just get it over with.

Secondly, Agatha, the main character, lost all of her drive and character after the first one-fourth of the book.  In the first part, she was smart, brave, and willing to be slightly scandalous.  She experimented scientifically and brought her friend, Victoria out of her melancholy.  Then after she leaves and the three years have past Agatha restricts her scientific pursuits.  I understand that this was supposed to increase and show character growth but it annoyed me to see her character in such mournful straits.  However, by the end of the tale, I could once again see the Agatha I had met at the beginning of the book.

I did like the mystery though.  I spent most of the book trying to figure out who Monsieur Herr was myself.  I did manage to figure it out a couple chapters before the characters did.  Well, I knew it was Lady Guthrie but I did not suspect that Monique was her cousin.  I knew Monique was involved I just didn’t know how.  I think the mystery was what really made the book interesting.  Without it, the book would have been blah because the romance part was only okay.

This book was not the best.  I would suggest reading other books before seeking this one out.