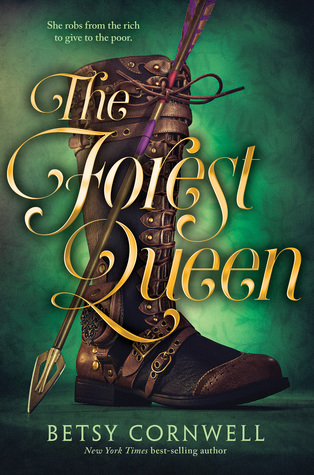 Desperate to escape the prison of her life and an arranged marriage, Silviana runs into the forest with two friends to find a different life.  Soon though she steals into a jail and leaves a message for the Sheriff stating that she will protect the innocent.  Soon people are flocking to her hideaway and before long a band of rebels is born.  As the past and that which she fears most approaches, Silviana must decide whether to flee or fight and if she does fight what she is willing to pay to save those she loves.

The Forest Queen was an intriguing new twist on the old ballad of Robin Hood.  It was filled with dark twists and the process of overcoming pain and facing the fears of the past.  The characters were heartfelt and the world building was unique but could have been expanded upon.

The world building was different and the author created something entirely new for the basis of the tale.  We learned little of it and it was much the same as the original Robin Hood.  The kingdom is filled with oppression from the nobles through overtaxing and the harsh punishments enacted due to minor infractions.  Besides that, the book told little of the surrounding environment in which the characters interacted besides the existence of a forest, a shire, and a river.

Besides the somewhat unsatisfactory world building, the characters were fantastic.  The main character, Silvie was haunted by nightmares due to her brother.  Her character growth was wonderful to read about for she grew from a girl unwilling to change and see life, as is really, is into a young woman who steals from her brother and the nobles giving the pilfered goods to the poor who are barely surviving so that the rich may live in resplendence.

Her love interest, Bird was mediocre.  He was strong and quiet always supporting Silvie but his character was not expanded on or really grown throughout the tale.  He was not my favorite and the attraction between Silvie and Bird was slow and almost nonexistent.  Besides Birdie, there was Little Jane who grew from a frightened girl turned out of her home to a happy and excited mother.  Her character growth was excellent since we saw her acceptance of a new life that afforded her options she had never thought of before.

Silvie’s brother, Sheriff John was extremely cruel and his intentions towards his sister were most certainly not pure.  He was just like any other cruel Sheriff who imprisoned and heavily taxed his constituents then tortured, killed, and jailed them for their inability to sustain the high taxes.

Overall, I quite enjoyed the book.  There were a few hiccups at the beginning when the author skipped a few scenes into the future which I personally found annoying but I liked the retelling of Robin Hood and would still recommend The Forest Queen.