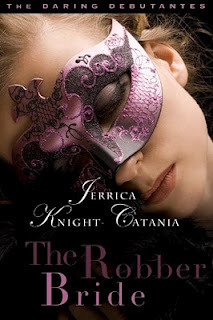 Victoria knew she needed to enact change in the world when she saw a poor girl on the streets.  So, she robbed the rich and gave all of the money to those who needed it more than the haughty aristocrats.  Her friend Phineas Dartwell, Earl of Leyburn suspects that Victoria is hiding something.  He wishes that Victoria would confide him but she refuses and he severs their friendship because of a wounded pride and an injured heart.  But when Victoria’s activities are brought to life, Phineas will do anything to see that his friend and perhaps future wife be acquitted of the charges.

The Robber Bride was a wonderful tale that I truly enjoyed.  I adored the main character who cared about those more unfortunate than her.  Indeed, she stole from the rich and gave to the poor much like Robin Hood but she did it all alone and almost no one knew of her illegal activities.  She cared about everyone even though she was a part of the peerage.  I loved how she was not afraid to back down even if her impetuousness sometimes got her into trouble.  Her friend, Fin was quite a wonderful gentleman who loved painting and cared dearly about Victoria and her brother.  It was hard not to like his character.  I was further endeared to Fin when he adopted Sally even though she was from the streets.

Besides the fascinating characters, I liked how the book did not completely focus on the romance.  In fact, the romance seemed to be a major side note.   The two main characters were in fact friends for the entirety of the book.  There were a couple kisses thrown in but it wasn’t until the very end of the book that the romance blossoming between Victoria and Fin finally came to a head with a proposal of marriage and a declaration of love.  This contributed to my enjoyment of the book for some books can become tedious and dramatic when they focus completely on the romance and add little action to spice the book up.

I would recommend this book especially to those who enjoy a romance with a lot of action.  In the case of this book a little action of a lady highwayman who steals from her peers to give to those who have less than she.